Last month I guessed that DC’s “bait & switch” non-event in Batman #50, a comic with over 100 variant covers, would make that book #1 for July, and it did.  DC added on Doomsday Clock #6, Superman #1, Catwoman #1, and Batman #51 taking half of the Top 10, but all these top sellers did not allow them to close this gap with Marvel, who beat them by over 7% in both unit and dollar sales.

Some will argue that Marvel won, at least in part, by outshipping DC, with Marvel at 126 items to DC’s 97.  The thing is, shipping more items does not tell the whole story, since a lot of those extra items are low-sellers.  The battle between the Big Two is really fought and won at the top of the sales charts.  On the Top 500 for June (this list is not out for July yet, but June tells a similar story), we see that DC had 7 items selling below position 350 on the list, while Marvel had a whopping 37 items in positions 350-500.  And the sales at position 350 are less than 300 units!  This makes a strong case, in my mind, that Marvel outshipping DC by 30 items that sold in aggregate less than 9,000 units is not a significant factor in losing by 7% in a market consisting of more than 2 million units shipped.

Marvel vs. DC vying for the fickle attention of their fanbase has also been extracting a lot of money from the wallets of those fans.  Image’s The Walking Dead, their usual top seller and often the only indie book to break into the Top 10 only rose to position 17 in July.  IDW, the 4th ranked Publisher topped out at position #116 withThe League of Extraordinary Gentlemen: The Tempest #1.   Marvel & DC consumed 75% of the market in July, whereas they had been as low as 2/3rds of the market in recent memory.

While comics are not all about super-heroes, it’s certainly understandable why a casual observer might make that assumption if they purely look at movies/TV/toys/games and the cherry on top, comic shops themselves.  These are typically dominated by supers whose popularity is undeniable.  It’s similar to the way that the general public displays a strong preference at the box office for the blockbuster films with big stars over independent/arthouse films.   Flashy entertainment is more popular whatever the delivery mechanism.  Personally, I love to see blockbuster movies, I rarely miss one, but I also see lots of smaller indie movies.  The same way I read lots of indie comics.  and people reading this may fall on one side or the other of this.  There’s nothing wrong with liking what you like, but understanding the patterns of public behavior in consuming entertainment helps understand why the comics sales in comic shops often breaks down in terms of Marvel & DC.

DC certainly has a dedicated fan-base, but it is unclear if many of those fans are not also buying their fair share of Marvel super-hero comics.  DC keeps trying, they have hired away top Marvel talent, recruited rising indie stars, they’re doing events featuring fan favorite creators, they ship popular books more than once a month, have multiple covers to choose from on popular books, have eliminated the $2.99 price in favor of $3.99, and in October will be putting out a bunch of foil enhanced covers.  All of these follow Marvel’s “extracting dollars from the fans” playbook, but short of the biggest of splashes (e.g. line-wide relaunches like New 52 and Rebirth) they just cannot seem to topple Marvel from the top of the sales charts.

I love reading the stories, but am also fascinated by watching this drama unfold each month as I watch the sales numbers roll by!

(BALTIMORE, MD) — (August 10, 2018) — Batman and Catwoman face their wedding day and make decisions about their future in Tom King and Mikel Janin’s Batman #50 from DC Entertainment, the best-selling comic book of July 2018 according to information provided by Diamond Comic Distributors, the world’s largest distributor of comics, graphic novels, and pop culture merchandise. 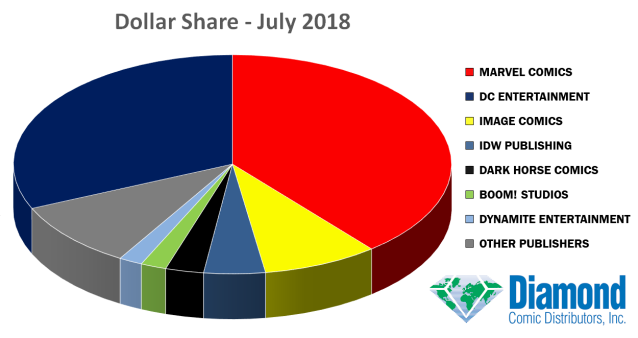 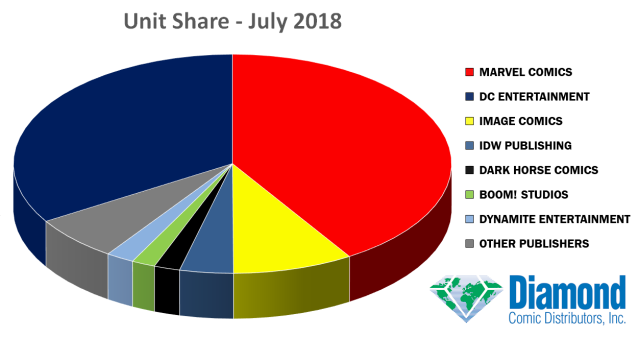 Tom King and Mikel Janin’s Batman Volume 5: Bride or Burglar from DC Entertainment was July’s best-selling graphic novel. Marvel Comics had seven titles in the top ten, with Jim Starlin, George Perez, and Ron Lim’s The Infinity Gauntlet as their top book at #3. VIZ Media had two titles in the top ten, led by One-Punch Man Volume 14 at #6. 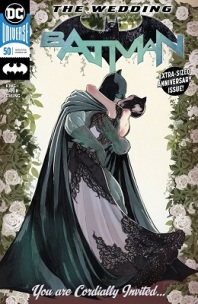 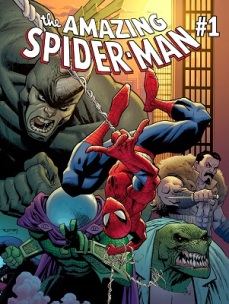 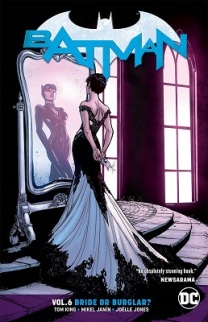 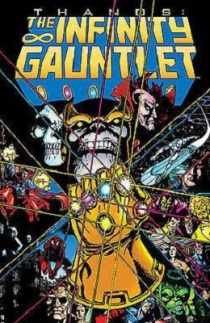 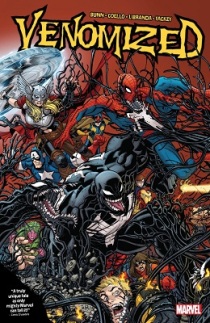 How does Diamond calculate the charts? It all starts at the comic book shop

The goal of ComicSpectrum is to provide a one-stop reference for everything about & related to comics and comics culture.
View all posts by comicspectrum →
This entry was posted in Comics, Comics Sales, Diamond and tagged Batman, Catwoman, comics sales, DC, July 2018, Marvel, Sales, Superman, Top 10, top comics sales. Bookmark the permalink.