Posted on November 15, 2016 by comicspectrum

The #1 book for October was BOOM!’s “Big Trouble in Little China/Escape From New York #1”.  This crossover of 2 cult franchises is interesting, but sales were really driven by its inclusion in the latest Loot Crate.  Loot Crate has a subscription base of over half a million and since BOOM! is an exclusive Diamond client all direct sales have to go through Diamond and are recorded on its sales chart, even though this comic was not topping sales in comic shops.  Walking Dead continued to place in the Top 10, with issue #159 charting in slot 10, which means Marvel & DC each had 4 books in the Top 10.

I said last month: “It remains to be seen if fans are moving away from Marvel or if they are instead being drawn in by the gravitational pull of the “newness” of Rebirth, and what will happen once the “new comic smell” wears off the Rebirth line and it becomes business as usual?”

It seems that sales are falling back to familiar patterns.  We’ll see if this continues with November sales.
– Bob Bretall (bob@comicspectrum.com) 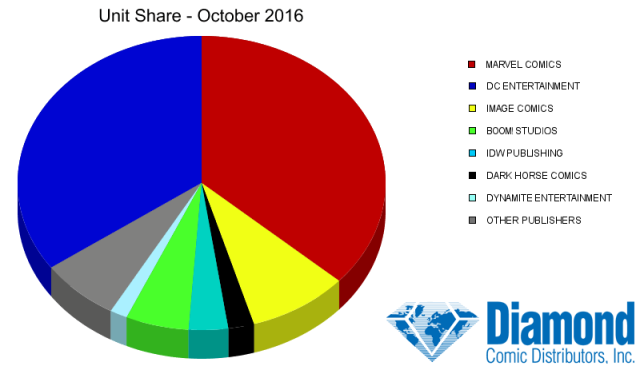 Marvel Comics had four titles in the top ten unit rankings including Champions #1 at #2, Robbie Thompson, Javier Rodriguez, and Alvaro Lopez’s Doctor Strange and the Sorcerers Supreme #1 at #3; Brian Michael Bendis and David Marquez’s Civil War II #6 at #7; and Kieron Gillen and Salvador Larocca’s Darth Vader #25, the concluding issue of the series, at #8. DC Entertainment had four titles in the top ten, led by Frank Miller, Brian Azzarello, Andy Kubert, and Klaus Janson’s Dark Knight III: The Master Race #6 at #4, followed by Batman #8 at #5, Batman #9 at #6, and Scott Snyder and John Romita, Jr.’s All-Star Batman #3 at #9. Rounding out the top ten, Robert Kirkman and Charlie Adlard’s The Walking Dead #159 from Image Comics ranked #10 for the month. Among the premier publishers, Dark Horse Comics’ Serenity: No Power in the ‘Verse #1 was their top book at #73, and IDW Publishing’s Teenage Mutant Ninja Turtles Universe #2 was their top book at #130.

Published to coincide with the debut of the new Champions team, Marvel’s Champions: No Time For Losers, a collection of classic 1970s Champions tales, was October’s best-selling graphic novel. Marvel had a total of four books among the top ten including Ryan North and Erica Henderson’s original graphic novel, The Unbeatable Squirrel Girl Beats Up the Marvel Universe at #6; Doctor Strange: Flight of Bones at #7; and the adult coloring book, Color Your Own Star Wars, at #8. Image Comics had five titles at the top ten, led by Kieron Gillen and Jamie McKelvie’s The Wicked and the Divine Volume 4: Rising Action at #2, followed by East of West Volume 6 at #3, Tokyo Ghost Volume 2 at #4, Low Volume 3: Shore of the Dying Light at #5, and Trees Volume 2 at #9. Rounding out the top ten, DC Entertainment’s Batman: The Dark Knight Returns Book & Mask Set ranked #10.

Dark Horse Comics’ Serenity Adult Coloring Book, an adult coloring book based on the fan-favorite Joss Whedon television series and movie, was October’s best-selling book. In total, Dark Horse Comics had five titles in the top ten, including Chuck Palahniuik’s Bait: Off-Color Stories For You to Color at #2, Avatar: The Last Airbender Adult Coloring Book at #5, and The Art of Fire Emblem: Awakening at #6. Dynamite Entertainment’s The Art of Atari, an art book that looks back at the classic video game system, ranked #3. Image Comics’ The Walking Dead: Rick Grimes Adult Coloring Book ranked #4 for the month. Also among the top ten, BOOM! Studios’ Mouse Guard Coloring Book ranked #8.

DC Collectibles’ Batman: The Animated Series: Deluxe Batmobile was October’s best-selling toy product and one of the manufacturer’s three products among the top ten. Diamond Select Toys had two products in the month’s top ten, led by the Marvel Premium Collection: Spider-Gwen Statue at #6.

WizKids/NECA’s Teenage Mutant Ninja Turtles HeroClix: Heroes in a Half Shell was October’s best-selling game product. IDW Publishing had two products among the top ten — the Back to the Future: Outatime Dice Game at #3 and Bed Wed Dead: A Game of Dirty Decisions Card Game at #6. 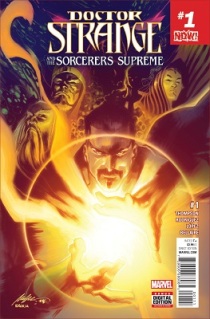 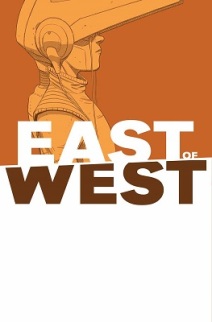 The goal of ComicSpectrum is to provide a one-stop reference for everything about & related to comics and comics culture.
View all posts by comicspectrum →
This entry was posted in Comics, Diamond, Top Sales and tagged Boom, DC, Diamond, Loot Crate, Marvel, October 2016, Sales, Top Sales. Bookmark the permalink.