Posted on March 4, 2016 by comicspectrum

Comic fans LOVE Batman.  Batman is consistently a top selling tile, so it’s no surprise that DC publishes the heck out of comics that feature the Dark Knight Detective.  If only DC could crack the code and get the rest of their line to sell like Batman does, because Marvel is still outselling them month after month.

I suspect Rebirth will give DC a big boost in sales.  I won’t be surprised if DC beats Marvel in sales when Rebirth hits the stands.  The trick will be holding onto that lead 3 to 6 months down the line.  One thing is for sure…there will be a massive battle between Marvel & DC this summer for the contents of the wallets belonging to super-hero fans.
– Bob Bretall (bob@comicspectrum.com) 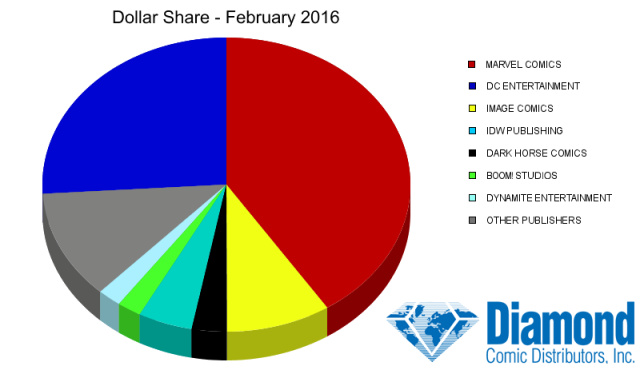 Marvel Comics had seven of February’s top ten best-selling titles, led by Jason Aaron and Leinil Francis Yu’s Star Wars #16 at #2. Also in the top ten were Brian Michael Bendis and Sara Pichelli’s Spider-Man #1 at #4, Cullen Bunn and Salva Espin’s Deadpool: The Mercs for Money #1 at #5. DC Entertainment had three titles in the top ten; in addition to Dark Knight III: The Master Race #1, Scott Snyder and Greg Capullo’s “Superheavy” storyline continued in Batman #49 at #2. Image Comics’ best-selling book in February was Robert Kirkman’s The Walking Dead #151 at #13. The penultimate issue of Chuck Palahniuk’s sequel to Fight Club, Fight Club 2 #9, was Dark Horse Comics’ top book at #63. IDW Publishing’s Back to the Future #5 was their top book at #102. February’s best-selling non-premier comic book was Oni Press’ Invader Zim #7 at #90.

Kieron Gillen and Jamie McKelvine’s The Wicked and the Divine Volume 3: Commercial Suicide from Image Comics was the best-selling graphic novel of February and one of the publisher’s four titles among the month’s top ten. Marvel Comics had two titles in the top ten, led by Gerry Duggan and Phil Noto’s Star Wars: Chewbacca at #2. BOOM! Studios’ Lumberjanes Volume 3 ranked #3 for the month. Rounding out the top ten, DC Entertainment had three titles, led by Frank Miller’s Batman: The Dark Knight Returns at #4.

DK Publishing’s The Batman Character Encyclopedia was February’s best-selling book. Also in the top ten was Dark Horse Comics’ The Eltingville Club at #2.

Diamond Select Toys’ Ghostbusters Select Series 1 Action Figures were February’s best-selling toy product and one of the manufacturer’s three products among the top ten. DC Collectibles had one product in the top ten, the DC Comics Super Heroes: Wonder Woman Bust at #9. 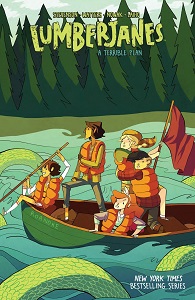 The goal of ComicSpectrum is to provide a one-stop reference for everything about & related to comics and comics culture.
View all posts by comicspectrum →
This entry was posted in Comics, Comics Sales, Top Sales and tagged Batman, comics, DC, February 2016, Marvel, Star Wars, Top Sales. Bookmark the permalink.