Posted on December 11, 2015 by comicspectrum

DC grabbed the #1 slot on the Top 10 for both comics and collected editions, but that was their only appearance in the Top 10.  Comic Shops gobbled up the $5.99 1st issue of Dark Knight III, it remains to be seen if that will sell thru to fans in top numbers or remain on racks.

Fans continue to support frequent new #1 issues, events and other special issues.  6 of the top 10 comics were #1 issues, one was an anniversary issue (Uncanny X-Men #1) and one was the latest issue of the Secret Wars event.  The only “normal” issues in the top 10 were Star Wars #1 and 12, and with the run-up to the new Star Wars movie, an argument could be made that these are far from normal.

Fans also do not seem to be scared off by escalated pricing.  Seven of the Top 10 comics were price over the now standard price of $3.99.  Two were priced at $5.99 and five at $4.99.  Publishers see that the higher price point is not keeping books from the top of the sales charts, so this could be opening the door for more and more offerings at these price points.  We saw the same pattern before the “normal” price ratcheted up from $2.99 to $3.99.  If fans continue to buy books at the higher prices, publishers will be only too happy to provide books at these price points.

The market share of the “Big Two” continued to rise, pushing out the independent publishers with their relaunches and events that are commanding an ever increasing percentage of the budgets of fans in comic shops.  Indies had some good gains this past year, but can’t seem to hold their ground against an assault by Batman, Star Wars and universe-panning events. 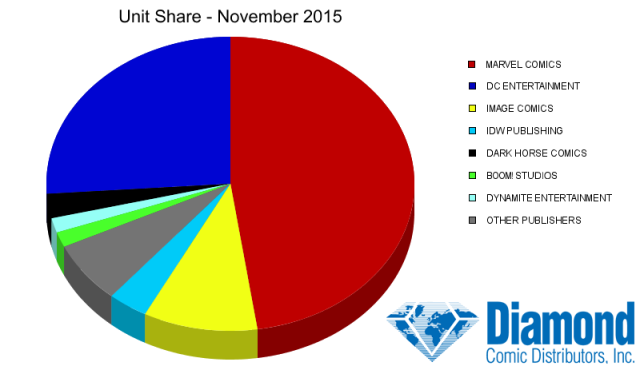 Marvel Comics had nine of November’s top ten best-selling titles, led by Jason Aaron and Mike Deodato’s Star Wars: Vader Down #1, the first part of their Star Wars crossover event. Also in the top ten were four debut titles from the All-New All-Different Marvel relaunch including Gerry Duggan and Mike Hawthorne’s Deadpool #1 at #3; Jeff Lemire and Humberto Ramos’ Extraordinary X-Men #1 at #5; Mark Waid, Adam Kubert, and Mahmud Asrar’s All-New All-Different Avengers #1 at #6; and Tom Taylor, David Lopez, and David Navarrot’s All-New Wolverine #1 at #10. Image Comics’ top book in November was The Walking Dead #148 at #21, Dark Horse Comics’ top book was Fight Club 2 #7 at #76, and IDW Publishing’s top book was Back to the Future #2 at #99. The top-selling non-premier comic in November was Warren Ellis’ James Bond #1 for Dynamite Entertainment.

Neil Gaiman and J.H. Williams III’s The Sandman Overture Deluxe Edition, a prelude to Gaiman’s acclaimed Sandman series from DC Entertainment, was the best-selling graphic novel in November. Marvel Comics had six titles in the top ten, led by Greg Rucka and Marco Checchetto’s Journey to Star Wars: The Force Awakens: Shattered Empire, the prequel to the forthcoming Star Wars film, at #2. Image Comics had two titles in the top ten, with Rick Remender and Greg Tocchini’s Low Volume 2: Before the Dawn Burns Us at #7. Rounding out the top ten, Dynamite Entertainment’s Vampirella 1969 ranked #8.

Image Comics’ J. Scott Campbell: Time Capsule 1994-2004, a retrospective of the fan-favorite artist’s first decade in comics, was the best-selling book in November. IDW Publishing’s Miracleman Artifact Edition, a lavish recreation of the artboards used by Garry Leach, Alan Davis, and John Totleben for the legendary series ranked #9 for the month.

Good Smile’s The Legend of Zelda: Wind Waker: Link Nendoroid was November’s best-selling toy. Diamond Select Toys had two products in the top ten, with the Marvel Select: Deadpool Action Figure as their best-selling figure. DC Collectibles had five products in the top ten, led by the Batman: The Animated Series: Batmobile, in scale with the new Batman Animated figures, at #6.

The DC Heroclix: Superman/Wonder Woman Booster Brick from WizKids/NECA was the best-selling game product of November. Diamond Select Toys’ Back to the Future Monopoly ranked #2 for the month. Also of note, the Superfight Card Game Core Deck from Image Comics ranked #5. 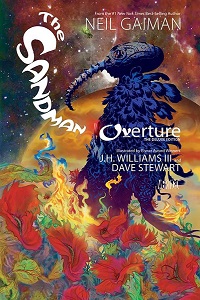 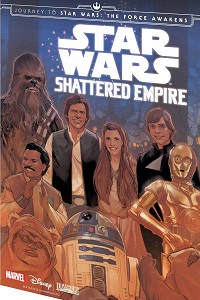 The goal of ComicSpectrum is to provide a one-stop reference for everything about & related to comics and comics culture.
View all posts by comicspectrum →
This entry was posted in Comics Sales, Diamond, Top Sales and tagged comics, November 2015, Sales, Top Sales. Bookmark the permalink.